The story of two palms

The question here was lingering quite a lot during the few weeks of my visit on “why I am in Taipei?” and “why I want to study Mandarin?”. I answered in the most generic ways at first, but after a few occurrences I really had to sit down and think on why I started this journey. I knew I was trying to find something new, a new culture, a place to live, a language to learn, study tea and other ancient teaching that are poorly translated to us westerners. I also knew a goal I had set in the forests of California on my PSI retreat, but there was definitely no clarity on why the goal is even there. The goal is to become a leader of masses. Why? Who knows. When? About 20 years? Lets just I did not need clarity to these questions, but then again, most people do not understand the concept of blind faith like that. This is the story of two palms and how it came about into existence. 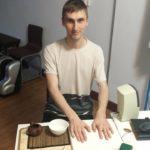 I was visiting an AirBnb host called Dario in Taipei on the 31st of May for just one day.He is an Italian male in his mid-late 20’s. Reminds me of old me, very skeptical and scientifically oriented. He asked me the questions I mentioned above and I explained to him in simple ways of where I want to end up. Deep down in my heart I wanted to “touch” him that day as he seemed to be lost in what he was trying to achieve in life. It was really hard to convey my aspirations though as they were not clearly defined at that moment and telling him that having “faith” in the process is just not going to cut it.

Dario wants to work on solar panels and renewable energy, but he is stuck in Taiwan working as a teacher because that’s the best way to be a resident here without good knowledge of Mandarin. His girlfriend is Taiwanese, so it’s not like he can up and leave either. I urged him, and you, to ignore the physical world though. It has always been there, even a 1000 years ago the problems were there. If it’s not global warming, it’s some bastard Swedish king up north who wants to attack us, so we need to train day and night to defend ourselves when the time comes. Famine, disease, drought, insects, taxes, robbers, greedy king – all kinds of problems! I am not saying these problems are fictional, they are as real as real can get. But I guarantee that you cannot solve them. Even if you are Elon Musk.

Aside: I mention Elon Musk here because I find it brilliant how he started the electric car movement. After a 100 years of repressing electric vehicles he managed to slip this machine under the radars of gas giants. The car was too expensive for most middle-class people to afford, but after they picked up traction, lowering the price for an already desired car sparked a wave of following. The problem that I have with that kind of following is that it is based on greed. We want the fancy car, we want it to be fast, we want it so we don’t have to rely on gas, so that it’s cheaper, etc. Just like anger, greed is very flimsy concept to unite under. Make a mistake and the following will fall apart in an instant. Just like the groupies in rock concerts – when you stop producing, they all disappear. We need a better way though.

Have you noticed a pattern in your Facebook feed? Republicans vs democrats, pro-Trump vs pro-Obama, nationalists vs liberals, church vs satanists, health trends vs pro-GMO, people who care vs people who do not care. We are all divided in one way or another. How can you touch someone (change their opinions) if you do not care to listen? When we are trying to push our opinions on one another. Unity is our strength though, but how can we unite if everyone thinks the other side is blind. One can say, in times like this, we need a true leader! So we start attaching ourselves to Elon Musk’s, Justin Trudeau’s, Putin’s, other president’s because we feel like we have no power to change much, but we do. We just don’t know the way.

I proposed to Dario to go the other route, join the right hand, the 10%. Even though it seems like the physical world demands our attention now (global warming, Monsanto, pollution, etc.), it would be unwise to go “fight” because all we will be battling are symptoms of the problems, not the causes. You see, I think we have no wisdom for the task. We chose to push back our spiritual growth to deal with the worldly problems for a very long time. Think of all the mental issues that we have in the society, and still we choose to ignore them and push through (with pills or other methods) like they do not exist. We’ve been pushing that side of us for a very long time and it’s high time to start digging. I do believe everyone has a lot of baggage that was left untouched. A lot of issues that have been brewing inside us for a long time and are now spilling out. The racism, the nationalism, the mom problems, the dad problems,
the money problems, the mental health problems, the anger problems and many others. I think if we could really work on ourselves first, we could move other people because we would truly understand them. Without judgement, without pushing our agenda, without hate & anger, without racism, without violence, without greed or ego. If we could treat each other like we treat ourselves… I know, these words have been heard before, but I don’t think most of us can put a finger on this one. If we can give everything we have to the guy on the street without a second thought, right now, then would we be ready to move people and nations. There is a bit more that goes into that, but it’s an extreme example of how we think towards accumulating wealth and
our overall security when we get too old to work. Security is a fake concept though, we never had it. The only security we have are people, and we have been moving away from that due to the money system. Secluding ourselves in our homes, not knowing the neighbors around us, stocking up on guns to protect our property. The time to work on our mental fortitude and spiritual growth is right now, when our bodies are abundant. When we have food, shelter and comforts. Imagine if the banks go down today, what will happen? You don’t really know the neighbor, but you are forced to cooperate with them. You cannot really trust them because they are hungry too and they don’t trust you either because you have your own agenda. If you have guns, you don’t need to put your family at risk with trust, you just shoot them and take what they have so you can survive. It’s dog eat dog world, ye? Now, imagine that you knew the neighbor really well beforehand. You do not need to build trust or shoot each other now. You can work together and rebuild without worries for your personal safety or your family’s. Imagine that you knew the neighborhood, what can you build with that?

Think of it this way, if you start giving away yourself fully to the community and people around you. If you move people with your word, if you share everything you have to make sure the people around you are taken care of, you will receive that love 10 times back. The people you touch and help will owe you a debt of gratitude that will surpass any monetary system out there. You will have security like no government can guarantee.

At the moment though, the concept is a far fetched idea. We are skeptical, the money system is the only one we know. We grew into it, it’s tangible and everyone else is doing it. We have no security within ourselves to even try it yet. It’s okey though, I do not ask for much. I just ask that you really start working on yourself instead of focusing on the world. Start taking responsibilities for only yourself and your actions. Stop being the victim, stop blaming others, stop distracting yourself when things get tough. Dig, dig, dig. Start noticing when you get angry. Why do you get angry? Stuck in traffic again? Why do you choose to live in a city so populated then? Why do you choose not to leave the house earlier? I would advise listening to spiritual teachers of the world. The ones who give concrete examples of ways of thinking. Choose your own path though, do not attach to teachers or opinions, avoid dogmatic thinking that segregates people. It’s never “us or them”.

Another good start is PSI-seminars, even though I spent a bunch of money on them, I ended up finding out issues that were plaguing me my whole life. I just did not know they were there. I needed a lot of external help, we need someone to call us out on our bullshit, and we need to be in an environment where we cannot run away. We all need that. Invest in yourself now, so that you can start working on building real changes in the world, being a role model worth following, moving people without ego, building a future and getting issues solved, together.

I believe life needs balance. We should move towards the 50/50 of spiritual and physical. But the world needs more wise people, more sincerity and selflessness. If we have more people like that, they will be able to move the world to working on themselves instead of focusing on the symptoms. In the end, if we all attain that 50%/50% of physical and spiritual we will be able to touch one another quicker and therefore unite on a completely different level than anger or greed. Faith is really important when working together. There are no certainties in life, anything can happen, but if we have faith in each other, we will be there, even in the worst times. Together, we can solve all the problems we have right now. But until we have wisdom to do so, we will achieve nothing.